Growing up as a Sikh American

I write to share this New York Times article about my childhood with my best friend, Gurbir S. Grewal (now New Jersey’s Attorney General), and my older brother Amardeep Singh, and our how our distinctly Sikh and American childhood shaped who we are today.
When my father came to this country in the late 1960s, he was told to go to a barbershop and remove his turban the day that he arrived. He refused because he truly believed in our country, and its promise of freedom and equality for all. That decision changed my family’s life, and its echoes carry on today in my work as your Mayor to ensure Hoboken is a Fair and Welcoming City, or play a leadership role in supporting our city’s LGBTQ community.
As your Mayor, while I take pride first and foremost in working to keep city taxes stable, building city infrastructure, and improving constituent services, I also take pride in representing an inclusive community, particularly at a time when there are so many dividing us at the national level.
Thank you. Enjoy the article by clicking here or reading below and have a great week.
Ravi
P.S. My favorite part of the article is when Gurbir engages a homeless man who racially harasses him by taking him out to eat rather than simply condemning him. It’s that spirit of compassion that I strive to bring to Hoboken.

Their First Temple Was a Tent. Now Sikhs Walk New Jersey’s Halls of Power
By Arun Venugopal
August 14, 2018
In the 1980s, when Sikh immigrants from India began arriving in New Jersey in significant numbers, they lacked a proper house of worship, so they set up a tent on a patch of dirt and began to pray.
Much has changed since then.
The tent in Glen Rock, a town in northern New Jersey, has been replaced by an imposing gurudwara, or temple, with a red brick facade and white domes. The congregation that once comprised 10 families now has hundreds of families drawn from across New Jersey and New York, two states that have among the largest populations of Sikhs in the country. 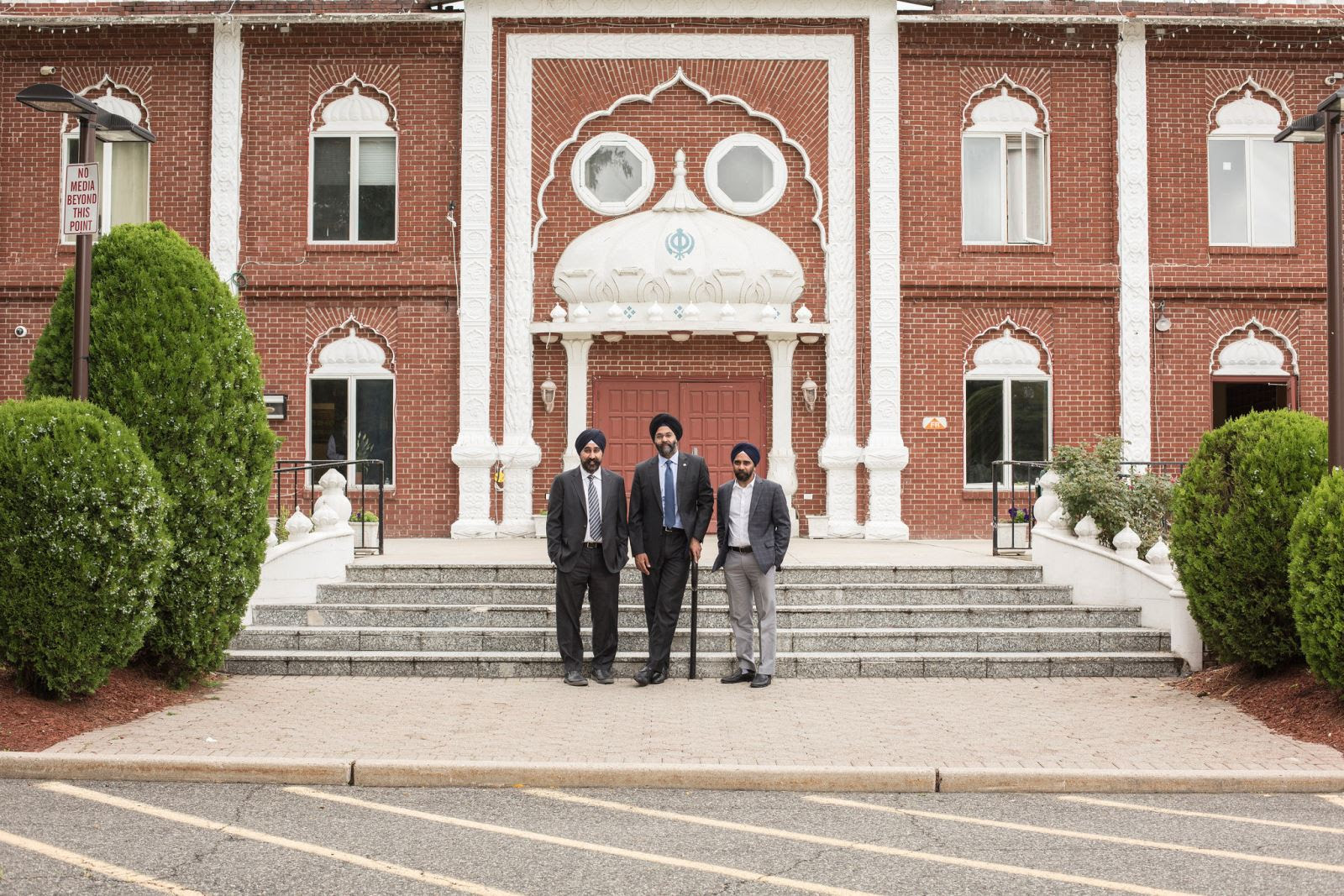 From left, Ravi Bhalla, the mayor of Hoboken; Gurbir Grewal, New Jersey’s attorney general; and Amardeep Singh, a founder of the Sikh Coalition, a civil rights group, in front of a Sikh temple in Glen Rock, N.J. (Bryan Anselm for The New York Times) 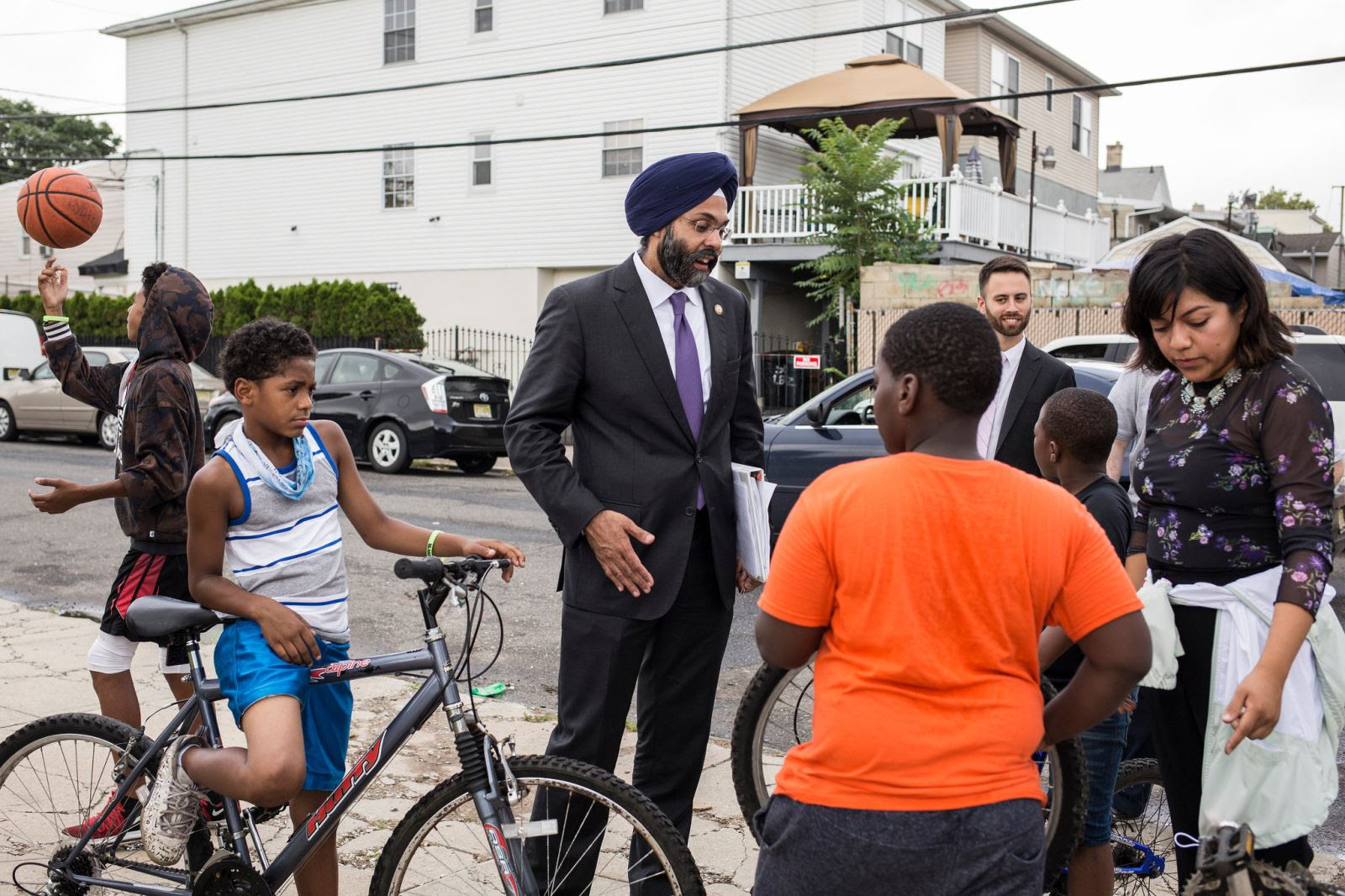 He joined Amnesty International, helped form student groups and was the first of the three friends to go to law school. Throughout the 1990s much of the political focus of the Sikh American community was centered on what was happening thousands of miles away in India.

Then came Sept. 11. The attention immediately turned inward as Sikh Americans, particularly men wearing turbans, were victims of hate crimes, including Balbir Singh Sodhi, the owner of a gas station in Arizona, who was fatally shot.

At the time, Mr. Grewal was working in commercial litigation at a private law firm in Washington and he remembers some of the looks he got in public. One homeless man, he said, would routinely accost him outside his office building.

“His name was Jimmy,” Mr. Grewal said. “I explained who I was and where I came from, and gave him a stack of coupons for McDonald’s, and we were friends ever since.”

For his part, Mr. Singh worked with others to form the Sikh Coalition, met with Attorney General John D. Ashcroft and helped ensure that protections for Sikhs were included in the Patriot Act. They also persuaded the Department of Transportation to issue guidelines on searches of Sikh passengers and pushed the Equal Employment Opportunity Commission to educate employers on workplace discrimination.

“That level of advocacy, that fast, could not have happened if we didn’t have some practice,” said Mr. Singh, a program officer for the Open Society Foundations, a group financed by George Soros that works to promote human rights and democracy. “That really came out of the ’84 experience.”

One challenge for Sikhs after Sept. 11 was how often they were being mistaken as Muslim. Some Sikh leaders argued that Sikhs needed to make the distinction clear as an act of self-preservation. But Mr. Bhalla and others strongly rejected such a strategy, arguing that Sikhs should “stand up for injustice not just against the Sikh community but really against anybody who is treated unfairly.” 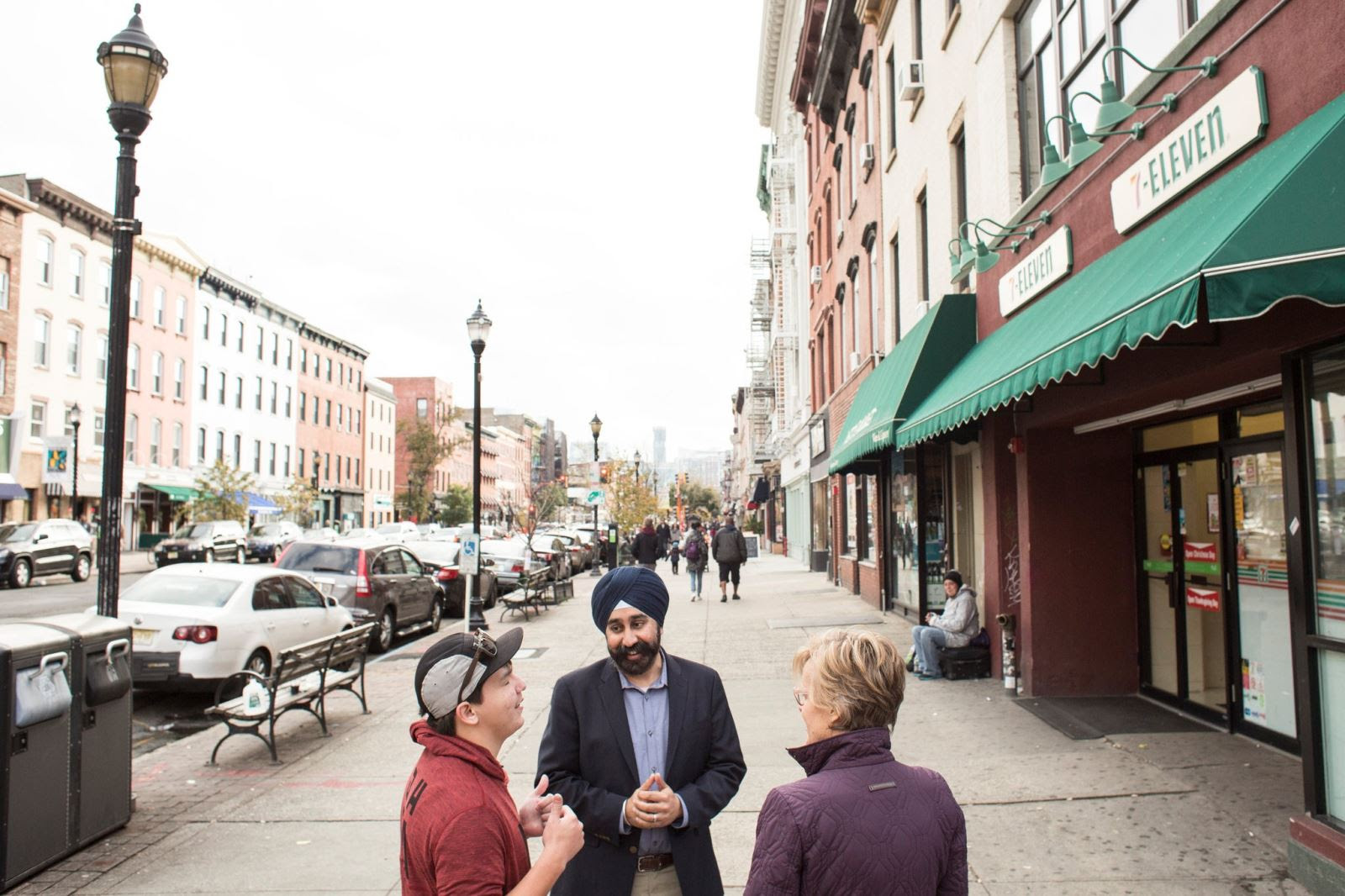 Last November, Mr. Bhalla became the first Sikh American to be elected as a mayor in New Jersey. (Bryan Anselm for The New York Times)

“In the eyes of God, there is no Hindu, there is no Muslim,” Mr. Bhalla said, quoting Guru Nanak, the founder of Sikhism. “In God’s eyes everyone is equal. That’s something that’s foundational in Sikh philosophy and belief.”

Mr. Bhalla said this basic Sikh value — he described its modern, secular equivalent as “radical egalitarianism” — explained his first executive order as mayor, declaring Hoboken to be a fair and welcoming city. He followed this with an order intended to protect transgender people by making all single-occupancy public restrooms gender-neutral.

While the concentration of Sikhs in New Jersey is a relatively recent development, Sikhs were among the earliest South Asian immigrants in the country, arriving over a century ago to work primarily as farmers and loggers on the West Coast. Their presence inspired one newspaper in Bellingham, Wash., to ask, “Have We a Dusky Peril?” in 1906, amid fears “that the dusky Asiatics with their turbans will prove a worse menace to the working classes than the ‘Yellow Peril’ that has so long threatened the Pacific Coast.

Not long afterward, a mob of white men violently expelled nearly 200 immigrants from the town. In the ensuing years, anti-immigrant hysteria grew, resulting in laws blocking immigrants from India and other predominantly nonwhite countries that were eased in the 1960s and prompted a new surge in immigrants, as well as a backlash. For Sikhs, one of the worst acts of religious violence occurred in 2012, when a gunman killed six people in a Sikh temple in Wisconsin.

Now Sikhs are starting to gain more political prominence across the country. They include Manka Dhingra, a state legislator in Washington; Preet Didbal; the mayor of Yuba City, Calif.; and Harmeet Dhillon, a Republican Party leader in California.

Still Mr. Grewal, who was appointed by Gov. Philip D. Murphy, a Democrat, and is the first Sikh to serve as a state attorney general, has had to contend with intolerance. In July, two New Jersey D.J.s, Judi Franco and Dennis Malloy, called him “turban man” and Mr. Malloy said he would not refer to the attorney general by name until he stopped wearing a turban. After a public outcry, the two were suspended for 10 days. 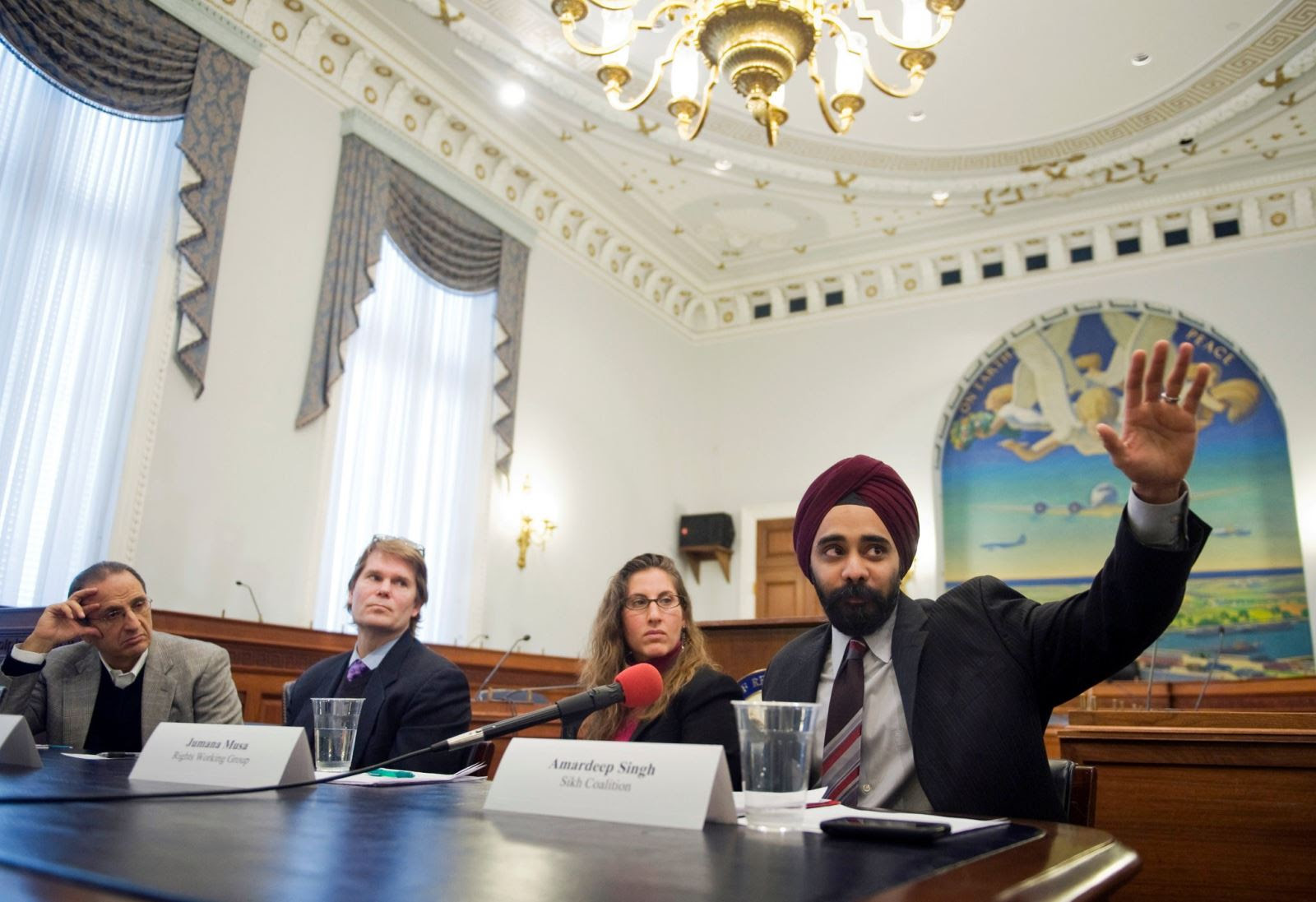 Mr. Singh, right, of the Sikh Coalition, during a 2010 briefing by the Arab American Institute on airport security and profiling. He appeared with, from left, James Zogby, founder of the institute; Michael German of the American Civil Liberties Union; and Jumana Musa of the Rights Working Group. (CQ Roll Call, via Associated Press Image)

“Sikhs have been seen and treated in America as perpetually foreign and automatically suspect and since 9/11, as potential terrorists,” said Valarie Kaur, a prominent Sikh American activist. “Ravi and Gurbir’s visible presence on the nation’s stage as public servants is breaking down these stereotypes and reshaping the nation’s moral imagination for ‘who counts’ as American. In a time of heightened racism and bigotry, their leadership provides hope and inspiration and offers us a glimpse of the America that is possible, the America worth fighting for.”

Ms. Kaur said she and other Sikhs regularly draw upon “the Sikh spirit of Chardi Kala,” meaning a positive attitude, even in the face of adversity.

This principle may help explain why the three childhood friends from the temple in Glen Rock are optimistic about the country’s future.

“People far greater than us and far braver than us have overcome far more than us in our nation’s history,” Mr. Grewal said. “And this is just another moment that’s testing the foundations of our nation’s democracy.”

“And,” he added, “I think the institutions will survive.”